DO YOU HAVE ANCESTORS WHO DIED IN WASHINGTON, DC, IN THE 1800s? DO YOU KNOW WHERE THEY WERE BURIED?

The Walter Pierce Park Archaeological Team couldn’t find burial registers for the African American or Quaker cemeteries at Walter Pierce Park. To find out who was buried there, we reviewed official District of Columbia death records, which document the place of burial. The result of our research is the Walter Pierce Park Burials Database. It lists the names and other information about 8,428 people laid to rest in the cemeteries.

The city of Washington began keeping official death records in 1855 in a large ledger called the “Interment Register.” In August 1874, DC began issuing individual death certificates, which contained more information than the earlier records. The Walter Pierce Park Burials Database identifies people by name, age, cause of death, length of time residing in the District of Columbia, the place of death (usually the home address), and other biographical information. 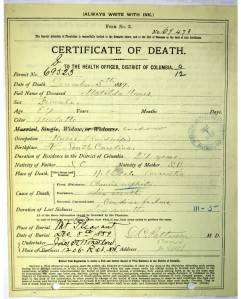 The 1889 death certificate of Matilda Hayes, a 67-year-old nurse/midwife who died in Hillsdale and was buried at Mt. Pleasant Plains.

In the course of its research, the Walter Pierce Park Archaeological Team found very few city records documenting burials in the Quaker cemetery. It was founded in 1807–some 48 years before the city began keeping death records. In addition to the Quaker and African American Mt. Pleasant Plains cemeteries, the database includes burials from the Free Young Men’s Cemetery located at 12th and V Streets NW from 1849 to 1870, because its graves were moved to Mt. Pleasant Plains in 1873.

CREATIVE SPELLINGS AND SOME GAPS IN THE RECORDS: If you’re looking for an ancestor or someone else in the database, we encourage you to use creative name spellings. Death certificates were filled out by doctors and undertakers, and misspellings occurred. In addition, there were large gaps in the city death records during the Civil War–specifically from June 1861 to June 1862, and from August 1862 to January 1866–causing the omission of an unknown number of burial records.

The Walter Pierce Park Archaeological Team hand searched more than 75,000 death certificates at the District of Columbia Archives to document the 8,428 burials in the database. We are extremely grateful for the help of DC archivists Ali Rahmaan and Bill Branch, who kept us on track through our months-long project.

5 responses to “THE NAMES: FIND YOUR ANCESTORS!”