THE DESCENDANTS AND THEIR ALLIES WILL SCHEDULE THE TENTH ANNUAL “SAYING THEIR NAMES, TELLING THEIR STORIES” EVENT AT WALTER PIERCE PARK ONCE IT IS SAFE. BLACK LIVES MATTER.

IN THE 1800s, TWO CEMETERIES OCCUPIED SEVEN ACRES OF LAND that included today’s Walter C. Pierce Community Park in the Adams Morgan neighborhood of Washington, DC. The Friends Burying Ground–the city’s only Quaker cemetery–was in use from 1807 to 1890. The much larger African American cemetery known as Mt. Pleasant Plains Cemetery, was owned and operated by the Colored Union Benevolent Association from 1870 to 1890.

The cemeteries were almost lost to time. Portions of the land were sold off and the graves forgotten as the city grew around them. Developers in the 1950s ravaged the site to build several large high-rises, eventually abandoning their efforts. In the 1970s, neighbors in need of green space persuaded the city to buy the vacant land. In 1982, a city park was born.

A headstone is lifted for inspection. (Photo by Mary Belcher)

In 2005, concerned citizens and Howard University anthropologists joined forces to protect the unmarked cemeteries at Walter Pierce Park. Their collaboration began in response to a city plan to construct large terraces in the park. Neighbors were aware of the park’s history as cemetery land. They were certain that the massive earth-moving project would disturb any graves that might remain. The concerned community was quickly joined by Mark Mack, a renowned Howard University biological anthropologist and laboratory director of the landmark African Burial Ground project in New York.

After months of debate, city officials relented. They allowed Professor Mack and a team of Howard U. students and independent historians to survey the park. Grants to pay the students and buy supplies were obtained through a nonprofit neighborhood group, the Kalorama Citizens Association. After three years of privately funded work, the Walter Pierce Park Archaeological Team received city funding to complete its research.

While one part of the team worked in the field, team historians reviewed city death records to find out who was buried in the cemeteries. They documented the names, addresses, causes of death and other biographical information of 8,428 people. Among them were more than 40 African American soldiers and sailors who fought in the Civil War. Also buried here were men and women who worked to free others from slavery, including key actors in the largest Underground Railroad operation in U.S. history: the 1848 escape on the schooner Pearl. (See the burials database here.)

The archaeologists surveyed the park using only non-invasive means. They didn’t dig because the point of the work was to protect, not disturb, graves. They found ample evidence of the cemeteries. The exposed skeletal remains of at least nine individuals were found. Coffin hardware, headstones, and grave offerings were found. The random positioning of many of the finds–including exposed remains and artifacts scattered on hillsides–provided evidence of the cemeteries’ desecration and neglect throughout most of the 20th Century.

Looking forward, the archaeologists, descendants, and volunteers hope to commemorate and permanently protect the graves that remain at Walter Pierce Park. Public awareness is essential to preserving this sacred place. If you would like to be added to the email list for upcoming events, write community liaison Mary Belcher, maryjbelcher@comcast.net.

A geophysical survey of Walter C. Pierce Community Park in Adams Morgan, Washington, DC, has detected at least 35 graves from the African American and Quaker cemeteries that once occupied the site. It’s possible that hundreds or thousands more graves are still intact some 30 feet below the present-day surface of the park, where they can’t be detected by scientific equipment. There were at least 8,428 burials made in the cemeteries during the 19th Century.

“One of the most important ideas presented in this report is that a large amount of fill [deposited soil] now covers most of the northern two-thirds of the park,” Dr. Burks found. “This fill is likely sitting right on top of the original land surface—i.e., the original surface of the cemetery. If this is the case, possibly hundreds or thousands of human burials remain in the park, entombed beneath up to nine meters [about 30 feet] of fill. In areas where the fill is relatively thin, the geophysical surveys found probable and possible evidence of graves.”

The Walter Pierce Park Archaeology and Commemoration Project is grateful to Dr. Burks and DC City Archaeologist Dr. Ruth Trocolli for permitting us to publish and share the Results of Geophysical Surveys in Walter C. Pierce Community Park, Washington, D.C.: A Geophysical Search for Evidence of Graves Related to the Mt. Pleasant Cemetery. 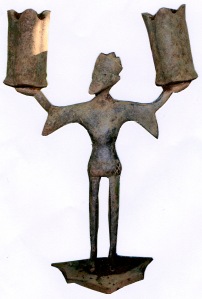